With these two platoons completed, I now have all the units for my first 100 point list. These were both a nice change of pace from painting tanks.

The techniques and colours for these was the same as with the tanks, but the Priests offered the chance to do some crew.

For the observer I decided to leave the camo off, to make him little different, and maybe he’s an older tank they had kicking around. I used the early transmission cover as well.

With the M10’s I used the roof that comes with the kit, as a way to speed up painting time (no crew or machine-gun) and because I quite liked the look. After completing them though, it does make me want to do my second platoon later with open tops. I like the way the Priests turned out so I’m not so scared of doing crew now!

Progress on my force has been going well, and now I have my third unit complete. These M5 Stuarts are my third combat platoon, so I only have the support left to do; M10’s and Priests.

It was a nice change to work on some smaller vehicles, and also something with hard edges (compared to the rounded Shermans). It’s tempting to do 7 more of them to make a formation out of them, but for now I’m committed to getting my 100 point list finished by 5th July.

My second platoon is now finished, giving me a Sherman company with 2 platoons. I only did 4 more 76mm Shermans to join my test model to make it a platoon of 5.

Painting for these was exactly the same as with the 75mm’s, but instead this time I used the camo template I found to copy. In some ways this was easier as a had something to copy, but also it was nice having the freedom to put the camo patches wherever. Going forward I think I’ll do a mix a strict to template, and free form, to give my force variety.

Looking through the contents of the British Starter Force I quickly zeroed in on the Stuarts and M10s. This was for the simple reason that I could paint a single, discrete unit that I could use to test out my painting and ensure I was happy with the plan for the army. It was also a good opportunity to sort my decal plan!

I’ll write up some notes on how I painted the tanks at a later date, but it was fairly straight forward, largely using some basic techniques. The hard part was figuring out the colours that I wanted to use. Luckily a quick chat with the rest of the Big Four and a flick through Colours Of War gave me some good ideas. With one platoon down, I am really happy with how the army is (probably) going to turn out. The green looks good, the decals really add some nice colour and it is a pretty quick and simple paint scheme to replicate. Time to knock out some M10s!

It’s always great finishing a platoon, where you can see all your work come together across a small group of vehicles. It always motivates me to crack on with the next unit. These 75mm Shermans give me my formation HQ and 1st platoon. I really enjoyed working on them, especially the decals which give them the finishing touch. 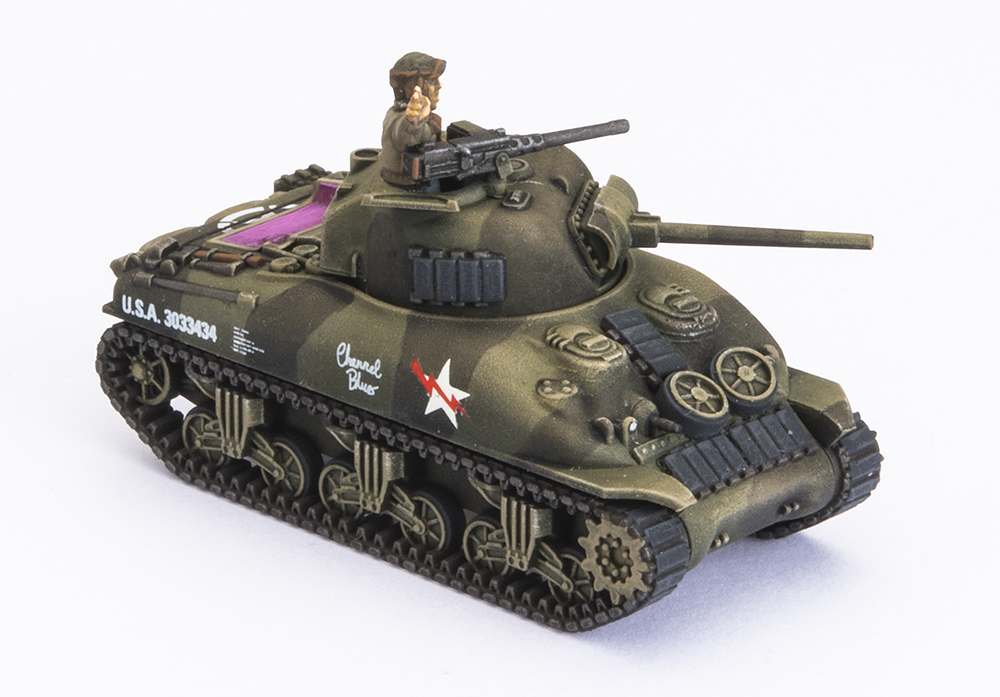 Above – a close up of Victor’s Formation Command tank.