It’s been a bit quiet on the Flames Of War Soviet front over the past few months with other hobby projects taking priority. Those of you following the Fig Four Of Late-War Instagram account will have seen some of the photos of my expanding winter terrain table, and of course Victor, Wayne, and I took a detour late last year to paint up some WWIII Soviets.

I’ve got quite a few units on the for my Soviets at the moment (IS-2s, Rota Razvedki, Captured Panthers, SU-76’s, and ZS M15’s) so I thought I’d start clearing some of these off my table starting with my SMG company. This is a useful infantry company for any Soviet player to have as it’s an infantry unit inside most tank formations, so is good at giving you tanks some staying power, looking after an objective, or dealing with enemy infantry on an objective. They are even scarier if you have a spare point to give them the RPG-6 Anti-tank grenade command card. 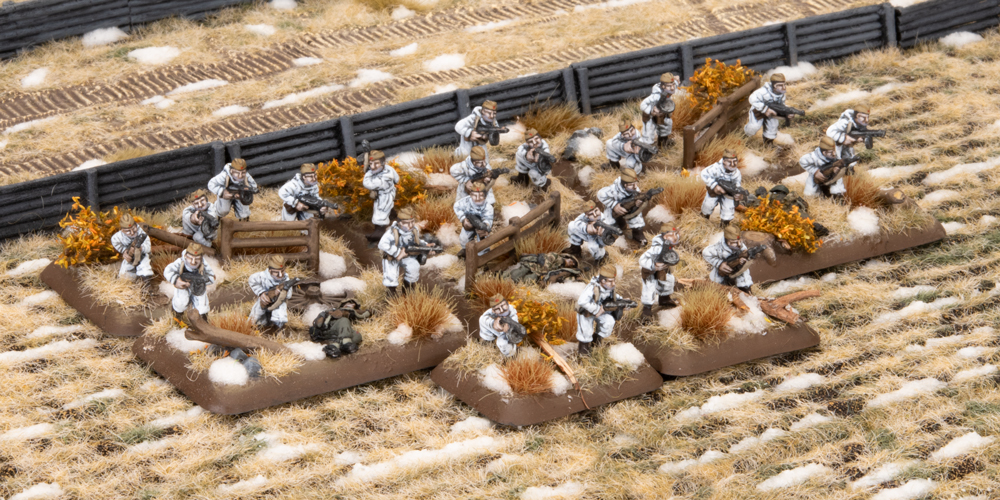 For this company I’m using some old Soviet Scouts that I’ve had hiding in my hobby space for over 10 years. Originally, I had intended not to do any new infantry for my Big Four of Late War army, but when I found these I was hit by a wave of nostalgia, as these were the first Flames Of War miniatures I ever painted (I painted an entire infantry battalion in 6 weeks, so they were pretty bad), I decided to actually spend some time on them to do them justice.

The paint job on these is pretty simple. Since the rest of the army is in whitewash the obvious thing was to paint the overalls in white camo. This was achieved by base coating in Deck Tan followed by a white dry-brush and black and grey washes. The overalls were then tidied up by block-painting some white over the top. I used my basic flesh recipe on them, and their sidecaps are painted in a standard Khaki Grey, black wash, Khaki highlights scheme.
I spent a bit more time on the basing than usual. Since it’s a Hero unit I wanted to show that they’d taken casualties, so I’d only enough to do a mix of 3- and 4-man teams. I used Battlefronts Rural bases because I wanted the fence elements there to add some structure to the bases and to make it not look like I’d just been lazy. The bases were then flocked to match the terrain table that I’m making. I found some German casualties that I had already painted and left-over from my previous Soviet army and added those to the bases as well.

The last thing I did was fashion some dead branches from some twigs and autumnal Heki leaf foliage. They are probably a little orange for my liking, but I think they add a bit more interest to the bases and make them pop. I might make some more of these branches and add them to My IS-2s as camouflage later, but on those I might give them a light airbrush of a dark brown to tone them down a bit.

The next half-finished project I’m going to work on are my IS-2s. I have 13 of them ready for pin washing and want to make sure that I get them done in time for our next tournament.