Back in 2009 we released the book “Hells Highway” which focused on the mechanised forces involved in Operation Market Garden and the road march to link up with the British Paras in Arnhem. As a Studio we really went to town with the Market Garden releases; two books, our second Firestorm Campaign, and a whole lot of internal playtesting and games. It was a great time and many of us started building new armies, inspired by the books and the narrative we were trying to tell.

In my case I started building a Sherman Company, a Cromwell Company and a Household Cavalry force. Starting with a hiss and a roar the project ended up unfinished and relegated to the garage as I got distracted by “the next shiny project”.

Fast forwarding 13 or so years I am now a much leaner, meaner and more focused painting machine when it comes to Late War British…

So where are we now? Two and a half years ago I started work on my Cromwell Formation and I would be lying if I said I didn’t dig out some of our old V3 books and look ahead in time to see where we might be heading. Part of my reasoning for picking the 15th/19th King’s Royal Hussars was the future inclusion of the Challenger.

Now I have a full Cromwell Formation from D-Day: British with enough models that I can also field the force as Hussars Armoured Squadron or (if we ignore the decals) a Cromwell Armoured Squadron, both from Bulge: British.

Looking forward I have a couple of lists I am keen to try out against the team. The first list puts a lot of points into two full strength units of Challengers to maximise my tank killing potential at the loss of HE rounds to dig out enemy infantry. I’ve added in the Land Mattress Battery in as a counter to dug in infantry or guns, but the force is really tuned towards trying to kill the enemies tanks as fast as possible. 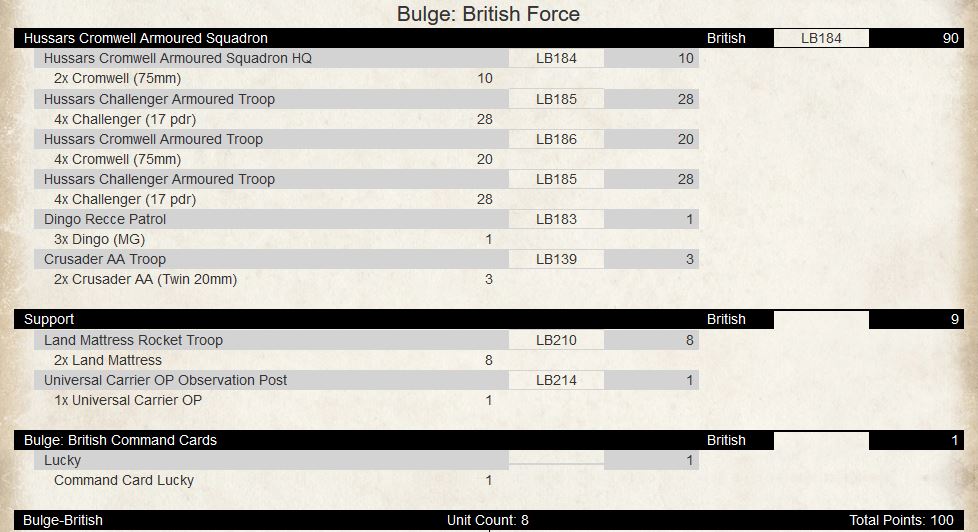 The second list trades out the second Challenger Platoon for another platoon of Cromwells, swapping the Land Mattress for some Cromwell CS tanks (which are in Formation) and the Belgian Resistance Command Card that allows me to remove a Minefield (great if I am trying to rush an enemy force that is keen on defence) or shift a Ranged-In Marker after deployment (to get the most out of my CS tanks). 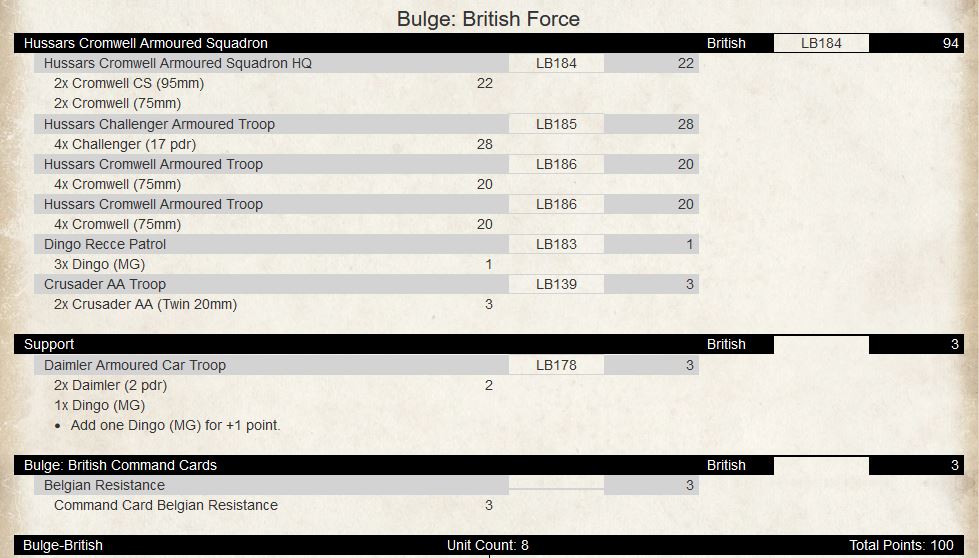 I am really excited to try out both of these Formations and (hopefully) surprise some folks with what a high speed tank killing force can look like!