The return of the Comet to Late War is really going to change things up for British players as it gives us something that hits as hard as a Panther and is as fast, or faster, than almost anything else on the battlefield. If you are looking for a tank that can rapidly move around and strike then this might be the tank you have been waiting for – just make sure you kill whatever you are shooting at as a Front Armour of 7 isn’t putting up much of a fight…

Long time followers of the Big Four Journey will not be surprised that I jumped on the Comet bandwagon faster than… well faster than a Comet! I’ve had a stash of largely built models hiding in my pile of shame, tucked out in the garage for a long time now, but thanks the last few years of painting British tanks I saw a “small” Formation of 10 models as being something like a holiday compared with the masses of Shermans and Cromwells I’ve painted in the past!

Thinking about the list I quickly came to the conclusion that I didn’t really care about the list. I know that sounds weird but with Comets being a fairly expensive tank and 10 of them taking up 70 points I basically decided that I have a pile of support options already painted and a few more planned, so why sweat about how I was going to use them.

As I write this though I thought I should have some sort of a plan… so here goes.

A Bob Each Way…
This a very New Zealand (or Australian) saying and basically means you are hedging your bets. In this case it means I am thinking about a fairly well rounded force with a little bit of everything. 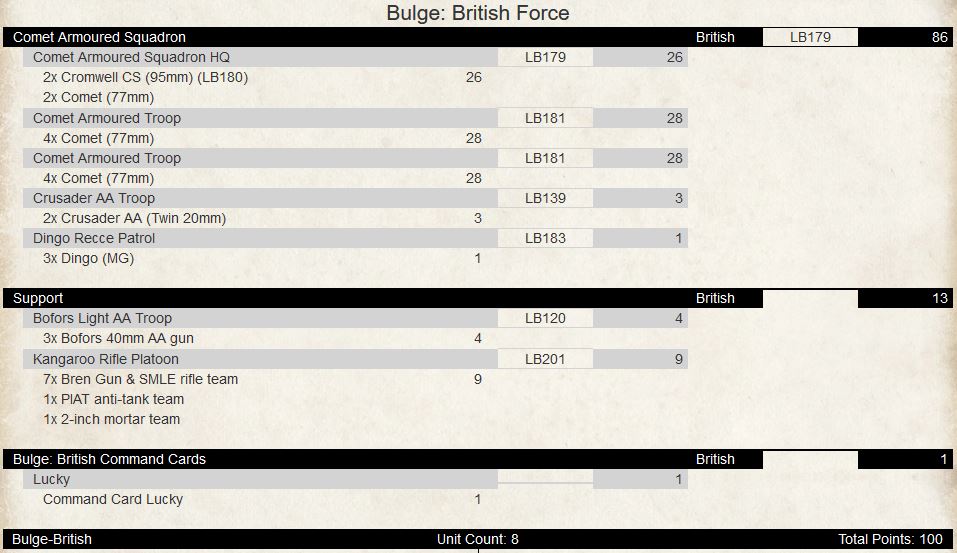 The force is based around the 10 Comets (of course) and includes a pair of CS tanks for some artillery and smoke support, whilst the Crusader AA are in there as my favourite 3 point Formation morale boosting unit. Rounding out the Formation are a unit of 3 Dingos. For 1 point they bring Spearhead and another unit to keep me on the table.

The list gets a little strange with the inclusion of the Bofors. These are really there as I was running out of good ideas, but some light guns struck me as a useful option to keep an objective safe from some roving recon or aggressive infantry.

Speaking of aggressive infantry, I have a Rifle Platoon to round out the force as these are good on attack or defence. I also picked them because if I am forced to keep a portion of my army off the table, then the Rifle Platoon, Crusader AA and a platoon of Comets come to 40 points. This makes a heck of a flanking force!

In Your Face!
The second list that I am keen to try is much simpler and way less cunning. It retains the 10 Comets, 3 Crusader AA and the Rifle Platoon, but trades everything else out to add in Chaffees and two units of Daimler Armoured Car Troops. 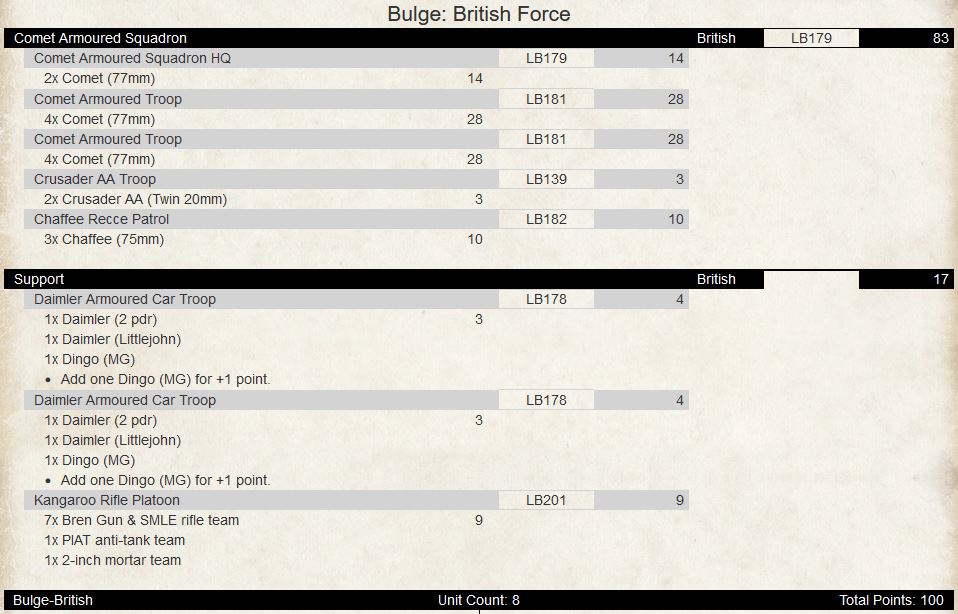 This gives me 3 units with Spearhead, a whole lot of fast and hard hitting tanks, a reasonably robust Formation and some infantry to go an assault an objective.

With the Comets now ready for some battlefield action I just need to organise a game with one of the boys..