It is with great honour I join the ranks of the Big Four for our journey into Late-War Flames Of War. As we’ve outlined in the Big Four Of Late War intro article each of us is making a force for Late-war from one of the Big Four nations in WW2. I’m building the German force. 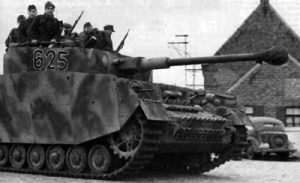 I’ll be using Fortress Europe to make my initial list and the new German Starter Force Panzer Kampfgruppe to supply the core of my models. The German Starter Force Panzer Kampfgruppe is great value and gives you an excellent selection of tanks, guns and infantry. In fact I won’t be using them all immediately, but they will be used. The StuGs have already been earmarked for expanding my Mid-war Assault Gun Company so it can be fielded in Late-war.

I’ve decided to theme my army on 2. Panzerdivision in Normandy and base it around Panzer IV tanks. In the past I’ve concentrated on Panthers and StuGs, as well as other types of assault guns, so this will be the first Late-war Panzer IV Panzer Company I’ve ever made. So using the Panzer III & IV Mixed Tank Company in Fortress Europe (page 42) I will take:

Left over from the German Starter Army are three 15cm Nebelwerfer rocket launchers and three StuG assault guns. The StuGs will go towards my period straddling Assault Gun Company, while the Nebelwerfers will be painted to be used with this army as needed. You may have noted I have a total on 10 Panzer IV tanks, but the starter army only comes with five. For the additional models I’ve split a Hit the Beach with Victor, getting three more and I also had a box of five Panzer IV H tanks at home! My German share of Hit the Beach also gives me more Panzergrenadiers and 7.5cm PaK40 guns I can use later.

I have one point left to spend which I haven’t quite decided on. I’m sure a handy Command Card will fill the gap in the future.