One of the most exciting Soviet Formations to me is the Hero T-34 Battalion. It was one of those lists that I was quite excited about when it came out in Version 3, but never had the time to paint or play before, so I’m quite glad that it made it into Fortress Europe.

On a side note as a rabid soviet player I’m very happy with the lists in Fortress Europe. Since we Soviet players have to wait longest for our army books, we get access to a LOT more formations straight away in Fortress Europe as it has to last us longer that the other nations.

The other bonus about the list is that it is a reasonable sized force, aka not a hoard army like I usually paint, so hopefully it will be more achievable given that I’m planning on a more time-consuming paint scheme than just painting them green.

The obvious place to start is the new Soviet army deal as it is fantastic value, and a lot of the models that I need straight off the bat. The only models in the box that I’m not going to use straight off the bat in this army are the KV tanks, however I’m going to paint them up to support the infantry battalions that I already have painted.

I like taking large formations wherever possible. There is nothing worse than playing a game where you are about to win a game by taking an objective, only to have that victory snatched away because your formation is broken, despite having lots of support on the table.

It is worth mentioning that the T-34 (76mm) tanks are Overworked, making them add +1 to the score needed to hit when they move (basically like old school Hen & Chicks), however the T-34 (85mm) tanks don’t have this so can fire and manoeuvre much more effectively.

Another cool thing about the formation is that it can have integral infantry and mortars. I’ve added the Hero SMG Company at full strength because they are a useful unit to sit back on an objective to free the tanks up to do their job, or, if needed they can get into assault and make the most of their Assault 2+ stat.

Note, I’m going to cheat slightly with painting my army. In my time I’ve painted at least 7 full strength Soviet Rifle Companies, so for the sake of speed (and not wanting to paint even more Soviet infantry) I’m just going to use some infantry that I already have painted for my army. Luckily it is even based in a suitable theme already.

Even though I know the rest of the Big 4 aren’t really going to be taking infantry to start out, I’ve also added some mortars to my Formation. It’s another platoon in the formation to keep them in good spirits, and mortars are generally quite useful against more balanced forces.

With the formation sorted it is time to look at some support.

The army deal comes with 4 SU-85s, which is great because they will be one of the soviets go-to units from now on. They are quite expensive, coming in at slightly less than 6 points a vehicle, but they are Fearless, Veteran, and Careful, making them the best troops you have. They have average armour, but will require 6s to hit (Is Hit On 4+, +1 for range, +1 for concealed) when I use them to cover the advance of my T-34s. 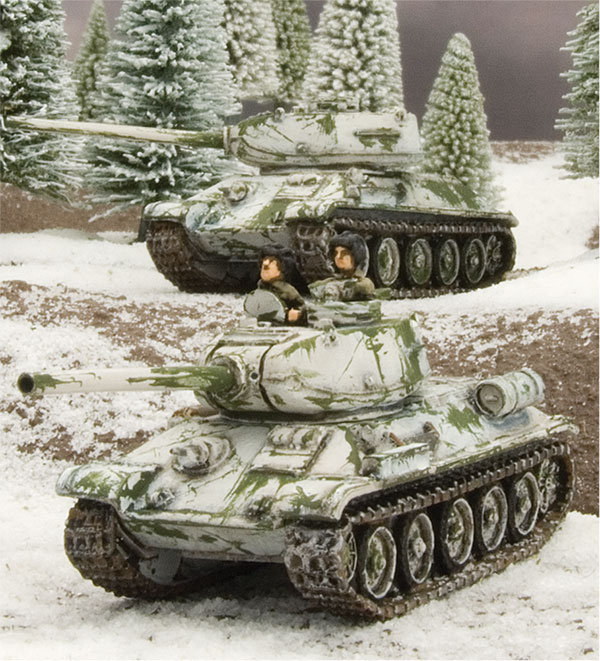 No Soviet Army is complete without artillery. Again, you have lots of options, 76mm guns, 122mm howitzers, or Katyushas. I’ve added 4 Katyushas to my army because I already have plenty of anti-tank weapons and don’t really need any dual role weapons in the force, and that Salvo template will be devastating against any infantry that I face.

You’ll notice that I went with the T-34 (76mm) for the HQ, rather than the T-34 (85mm). The main reason for this is that the Soviets don’t have access to any observers, so I’m going to use my Battalion HQ as the observer. If he is observing he is not shooting, so any points used to upgrade him are wasted. Also, if he doesn’t have a big gun, I’ll be less tempted to use him in the wrong role. Also, using him as a dedicated observer means that I can hide my fragile rocket trucks out of sight.

The last unit in my force is the Hero T-70 Company. I’ve added this basically as a nuisance unit. It has a good enough gun that opponents can’t ignore it in case they get around the flanks. It’s not there to reliably take anything out, more to distract attention away from my main attack. 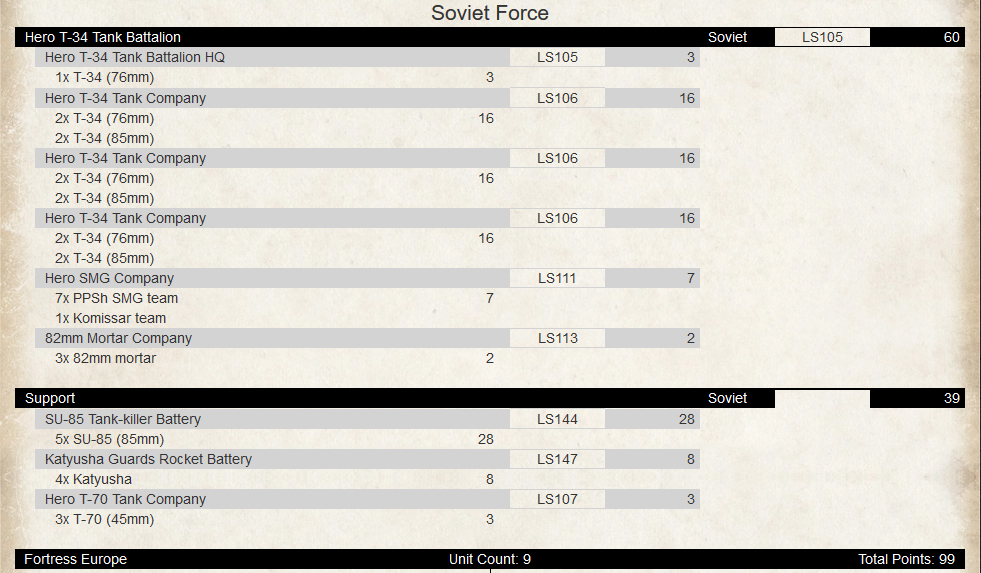 I’m also going to future proof my army by painting all the extra turrets for the T-34s, so that each hull has both a 76mm and 85mm turret, as inevitably later books will add options for hero units armed with all T-34 (85) tanks. It also means that with very little effort I’ll have a new Mid-war army at the same time as painting my new late War army.