Another Big Four Detour in the books! Our Big Cats project was a lot of fun, and we’ve all ended up with quite unique armies, even though they share a similar theme.

Lets take a closer look at everyones hard work and see what the team thought of their new armies….

I really enjoyed painting this King Tiger army. It was nice to paint a small army for a change. The King Tigers and Pumas turned out well, but my favourite part of the army are the Fallschirmjäger. They took the longest, and were the most challenging to paint, but I’m quite proud of them. They are possibly some of the best infantry that I’ve painted.

Also, now I have painted three out of the four big four armies for Big Four of Late War… so I may have to paint a British army to complete the set. 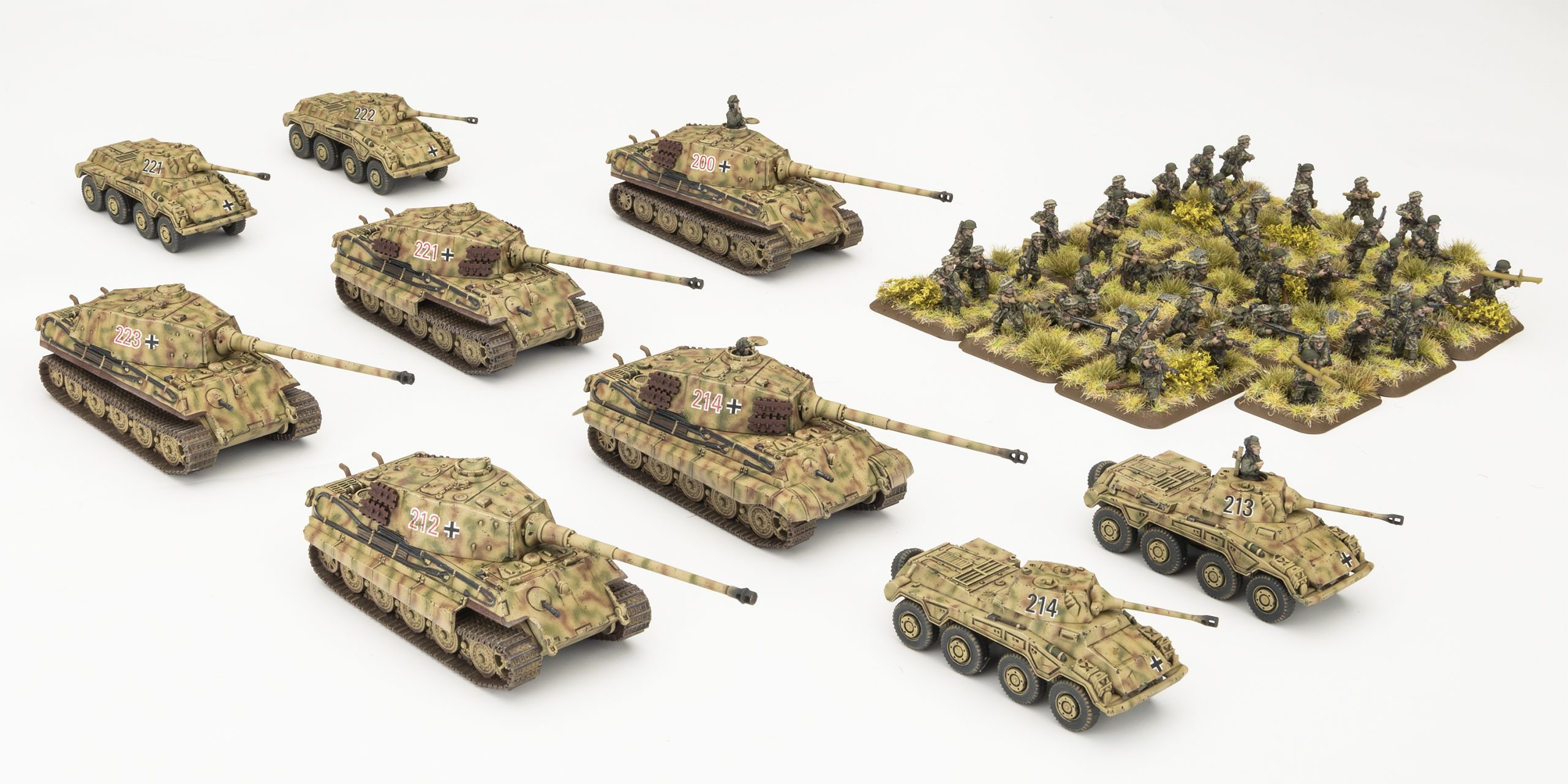 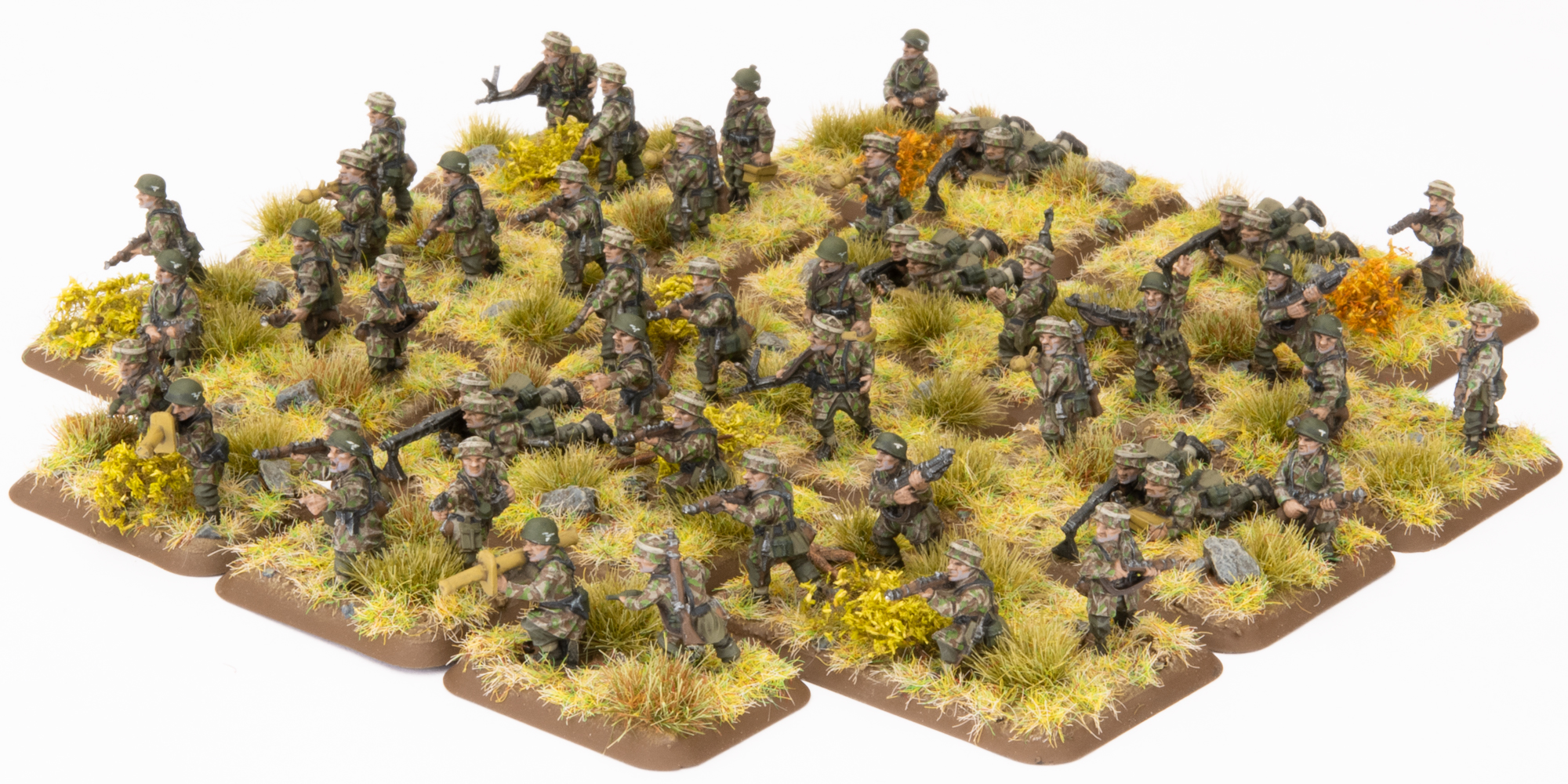 Like the rest of the guys, I was very excited to jump on the bandwagon and paint some Germans. If nothing else they would provide a nice change of pace from all the British Green I have been doing recently, but hopefully it would be the kick-start for a new late late very late German army.

I’m really excited to have completed this starter force, but a little embarrassed that I failed to do my stretch goal of a pair of Puma Platoons and a battery of Hummels. It wasn’t a lot of extra work, but I found my focus divided across too many projects and decided that they could wait. They sit at home next to my hobby space taunting me every time I sit down… 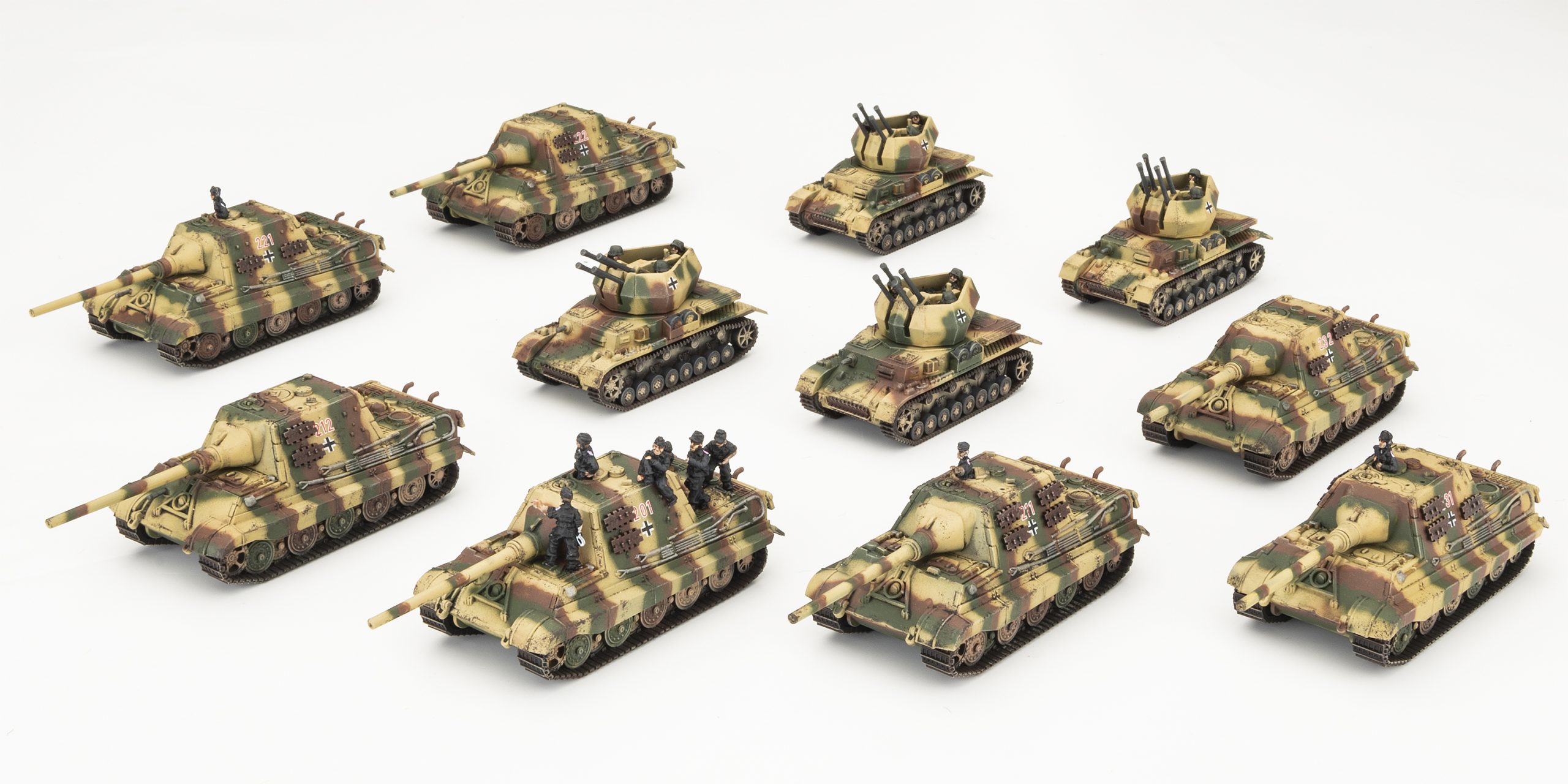 On the positive I have made a start and am eager to do the first of what I hope will be many expansions to the force over the coming months!

For Bulge: German I‘ve added a few more Units to my Big Four Germans in general, but as an entirely separate challenge we all made a 100 point force based on one of the new Big Cats released for the book. I chose Tiger II heavy tanks. These were great kits to assemble and paint. I picked an unusual camouflage scheme known as “Octopus” because of its wavy lines and small rings. It did not prove as difficult as I thought it might be.

Other than the six Tiger IIs I painted I added some self-propelled artillery with 3x Hummel (also new plastic). I went with a simpler scheme to match my other Germans. To spot for these I converted up a Panzer IV OP, which I will just field using the Panzer III OP card and stats. I also painted a pair of Sd Kfz 234/1 (2cm) 8-wheeled armoured cars (the Puma’s less popular brother), these will also be used across multiple German Forces.

My final unit was a Volksgrenadier Rifle Platoon. For this force it is at minimum strength with just five teams to fit in the Force, but I have since painted another two teams and two Panzerschrecks. These have now become the start of a Volksgrenadier Company.

Still have more Bulge: German units I’ve completed, more on those next time. 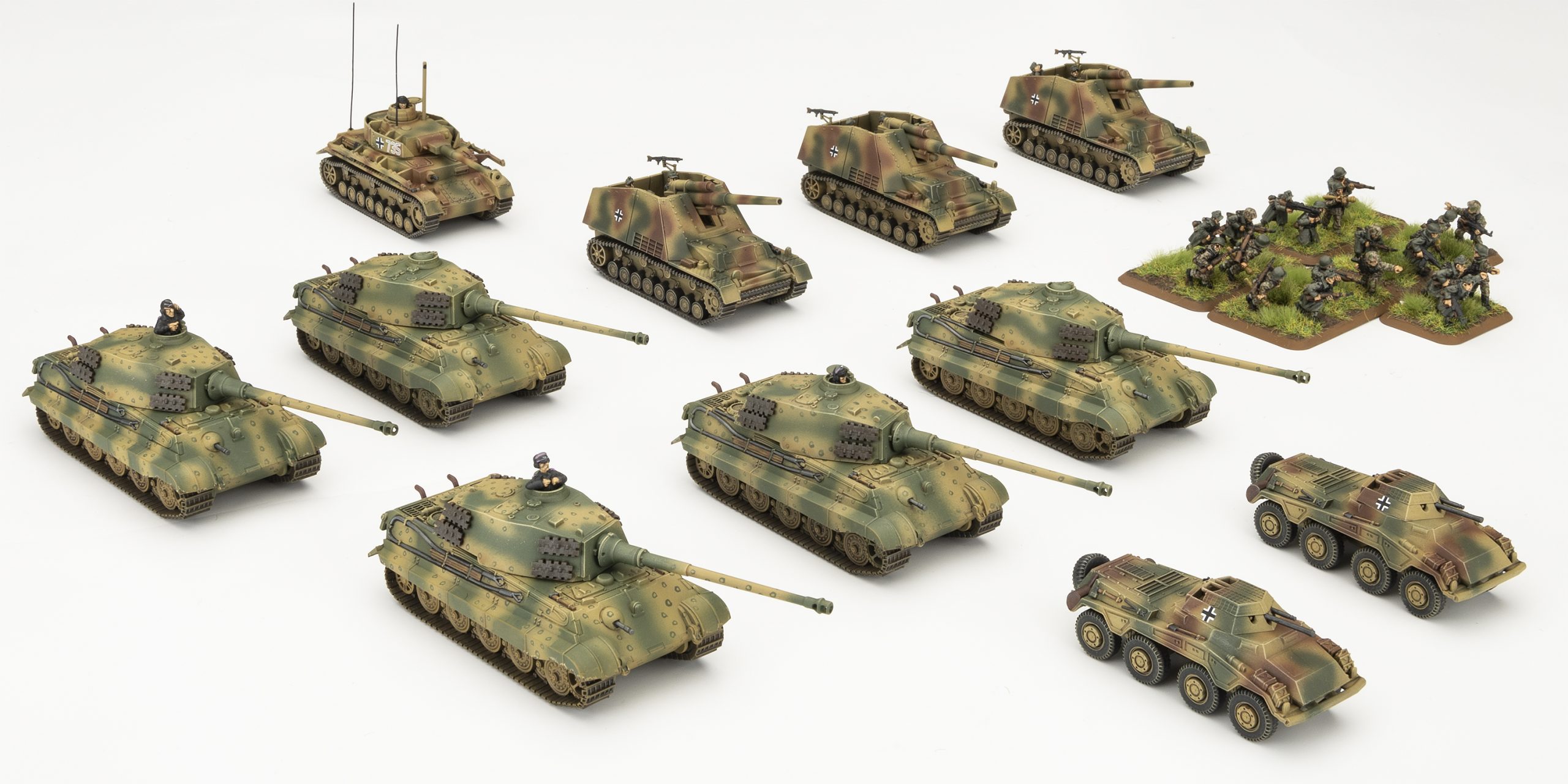 When we started this little themed project I didn’t think I would end up with 7 reconnaissance vehicles and an infantry platoon, but here we are. The big cats are the stars of the show, and while I’m really happy with how the Tiger II’s turned out, I think the Panthers might be my favourite.

It has left me eager to expand the force with even more tanks (8 more Panthers perhaps?) and a second platoon of infantry (with half tracks). But for now the Dunklegelb must be washed off the brushes to make way for the next project… 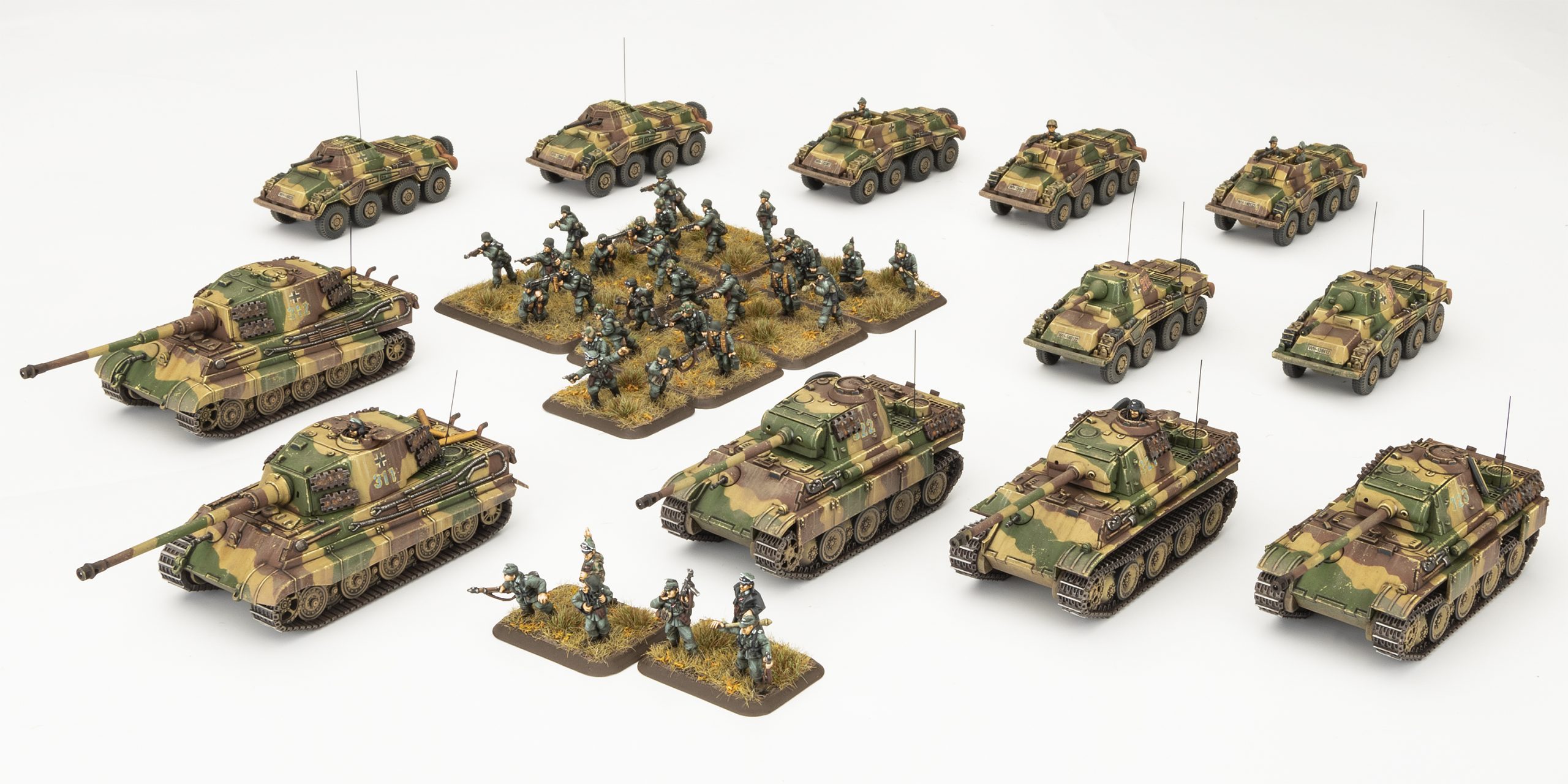