I have a massive list of Germans that I’ve been wanting to paint for a while now, but I’ve been too busy painting my Winter Soviets and Americans.

The Big Four: Big Cats detour gave me the chance to test paint schemes that I plan to expand across a large German project that I have been planning and building for many years.

The King Tigers were just the start of the army and eventually I’ll be able to field any German tank that I want. They will all be painted using the same method so will look consistent regardless of the models that I want to but on the table.

Rather than painting them in one big batch, I’m going to design some sensible armies to help split them into painting batches.

With the King Tigers and Pumas ticked off the list, the release of the new Mid War Eastern Front army deals makes it a great time to tick the Panzer III’s and Panzer IVs off the list.

The Humble Panzer III… In Late War
I love Panzer III’s. Ever since the old V3 book ‘Dogs & Devils’ came out I’ve wanted to paint a Herman Goring Mixed Panzer Company as it’s a great way to field a lot of them. At one point I even went and bought an entire army of resin and metal Panzer III’s and IV’s, but that been sitting in my drawer of shame… assembled… base coated… unloved… and it’s now time to replace them with plastic and move them from the armies started column to the armies completed column. The great thing about the humble Panzer III’s and Panzer IVs is that (as long as you aren’t a power gamer) they are useful in both Mid War and Late War. While I’m going to primarily paint these tanks for Late War, these will definitely find their way into my Mid War games, and by painting them for Late War I’ll always have enough for any Mid War army that I want to build. 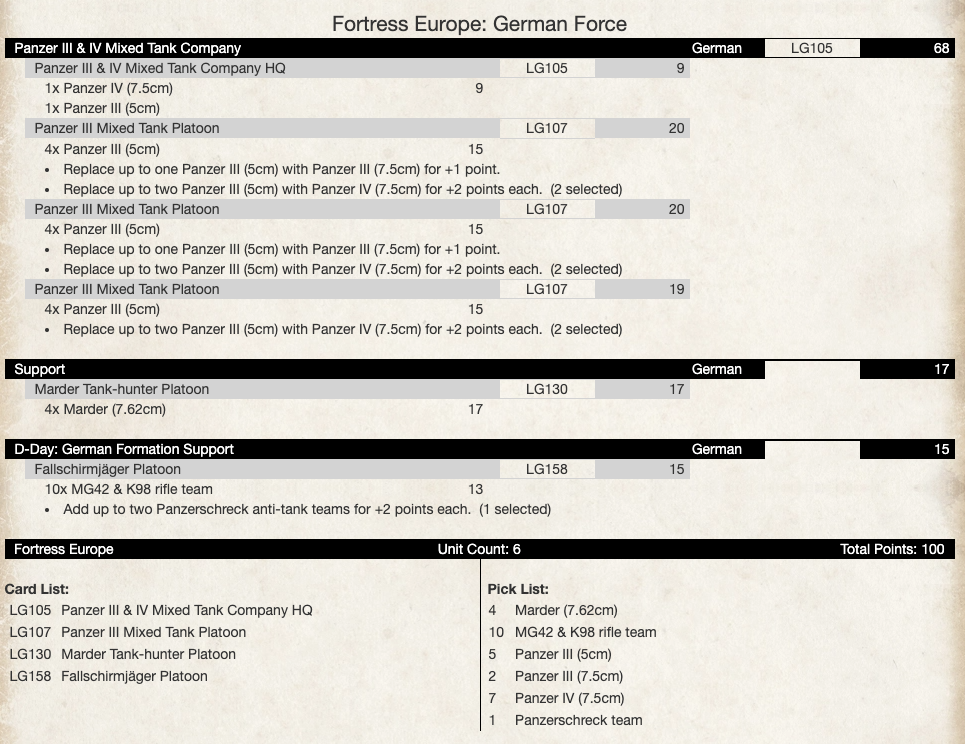 I’m basing my list off a Mixed Panzer Company from Fortress Europe, as that’s the only way of getting lots of Panzer III’s in an army in Late War.

All of the combat platoons are a mix of Panzer’s which are backed up by Fallschirmjäger and Marders, as that is on theme with Herman Goring in Italy and uses the Infantry that I’m currently painting for my Bulge: German Kingtiger force.

In a later batch I’m going to paint up a few Tigers and Elefants, which will end up in my Herman Goring list as they are also very thematic for Herman Goring.

Modeling The Vehicles
Since these Panzer III’s are old model tanks by Late-War standards, I’ve done a bit of surgery on the schürzen to remove some of the panels to help make the models look old and beaten up.

I’ve achieved this by using the blank schürzen rails from the Panzer IV H sprue and carefully cutting up and rebuilding the schürzen. The other bonus to doing this is that I can now leave the tracks separate for painting.

Since I like unique models, the Panzer IVs I am going to build as late production Panzer IV G models that were in production between 1943 and 44, which puts them at home in both Mid War and Late War.

It was actually an easier conversion to make my late production Panzer IV G’s than to modify my Panzer III’s.

Initially the Panzer IV G was armed with the L/43 barrel (which comes on the Panzer IV early model), but when the longer L/48 gun became available it became the standard armament for the tank and all the tanks that were returned to Germany were retrofitted with the new gun. For the L/48 barrels I stole the barrel off the same Panzer IV sprues that I stole the schürzen rails from.

Other visual changes include the addition of a spare wheel stowage box on the side of the hull, which comes on the Wirbelwind frame. Conveniently the Wirbelwind comes with the early Panzer IV sprue, so that was an easy way to get most of the model.

Technically these should probably have Schurzen and the later single piece hatch, rather than the split commanders hatch, but I just prefer the look of Panzer IVs without the schürzen.