Like most of the Big Four Of Late War I was super-jazzed with the T-80 arriving in the WWIII: Soviet book, and decided to join in the fun and paint up a new army for the launch (evil glares at Chris for not participating).

Now I’m a bit of a perfectionist when it comes to painting which means I’m normally a slow painter, so I thought I would just this as an opportunity to challenge myself to pump out an army quickly.

Rather than noodling an army list to build my army around I decided to just paint some of the new models that I thought looked cool, points and army composition didn’t really make me decide what to paint.

The core of my force are some T-80s. I figure 10 should be enough to cover me for most situations. Next up are some BMP-3 Scouts, again because they are new plastic and look super cool.

One of my favourite new units in the book is the TOS-1. I have been badgering Wayne, Phil, Chris, Evan, and Pete to make the TOS-1 since the start of our WWIII journey, so now that we have it I thought it would be rude not to paint some. As well as looking cool, game-wise I think it will be a good choice to have available to my Soviets since I tend to run tank heavy armies and struggle to deal with infantry. Their Brutal bombardment will certainly help with that.

Lastly, I’m painting a platoon of 2S6 Tunguska AA tanks, mainly due to rule of cool, I just think they look awesome.

Plugging this into Forces it comes out to an inconvenient 101 points, so I’d probably have to drop a BMP-3 if I were to take it to a tournament.

Amongst the Big Four Of Late War we have been discussing playing big boy games of 150 points using the more modern equipment that has started appearing (T-80s, M1A1 Abrams, Challenger I’s, Leopard 2’s etc). Luckily I can make this a 150 point list just by making them Heroes and adding the Mi-24 Hinds that I have already painted, a few infantry stands, and a pair of Gophers for a bit more AA. The TOS-1s are probably a suboptimal option given that none of the guys are going to go particularly infantry heavy for these games, but sometimes you don’t always get given the tools that you need to do a job and just have to make do with what you have available. 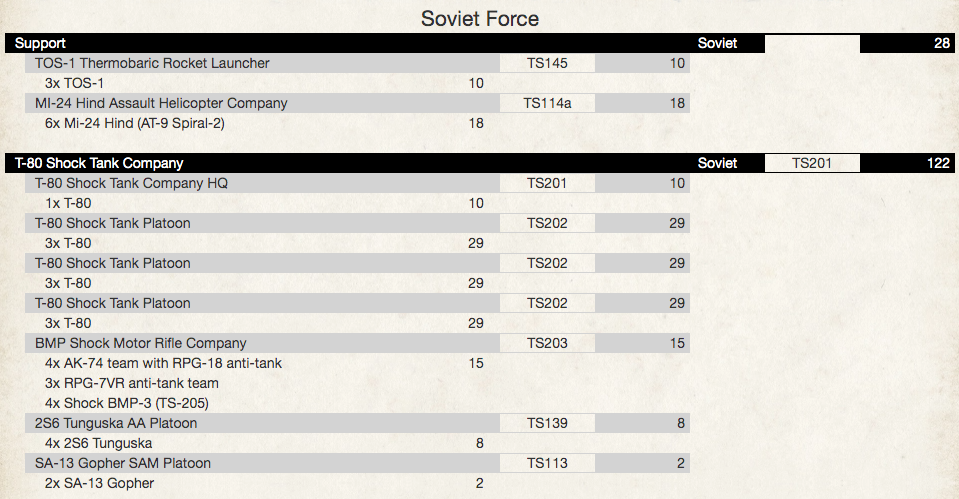 As far as the fast paint challenge has gone, I’m about 3 weeks in and I’ve managed to finish the T-80s apart from the tracks and the rest of the army is not far behind. With another week I think I’ll have the army completely finished. The army is definitely not painted as well as I would usually paint, but I’m pretty happy with it, and I think looking at effort vs reward it’s pretty good. I’m just looking forward to putting it on the table for a few games.