Very early on in the Big Four Project I painted up a platoon of Crocodiles for my British army. They were a great model to practice my technique on but ever since they have been crying out for some friends. After our first Lockdown period I managed to squeeze in a little garage time and get these big boys painted. With an HQ and two platoons, along with the obligatory AVREs (and Crocodiles) I feel like I have the start of a decent Churchill based force. For completeness sake I would like to paint a third Platoon and a Company of the earlier Churchill III tanks, but that’s something to aspire too…. 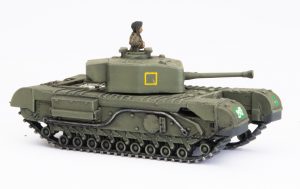 One of the things I really enjoyed, and you may not be able to see it from the photos, is that each tank is different in the two platoons – one uparmoured “late” Churchill, one 6pdr armed Churchill and one 75mm armed Churchill. This means I can run the platoon with all the options, but I don’t feel like the complexity I can keep it to myself and not worry my opponent. I will say though, if you plan on doing the same thing, to be very diligent with your planning and assembly… lets just say I may have gotten mixed up at least once and had to remove parts and glue new ones on…