Rolling in to FlamesCon this year I was very excited to be getting out to spend some time with the wider gaming community, put some figures on the table, and have a great weekend with friends. I had been painting like a mad man (even taking a week off work to complete some elements for this army and a WWIII: Team Yankee force that has been on a slow burn) and was keen to see how the force went.

As Wayne mentioned in his article, a friend of ours, Phil Petry, had passed away just days before the event and for many it was still quite raw. Coming together as group, laughing and sharing some thoughts no doubt helped with the process. In his honour his friends Ian and John ran his army during the tournament and it was nice to see his latest army on the table. 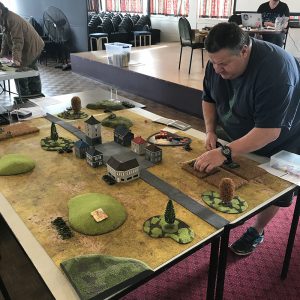 Round 1 was verses my old mate Ray and his Soviet assault guns. It was a bit of an odd match up as my recce was able to pin his forces in place lest the they sneak in and take the objective. Combined with both of us having units in reserve meant he had to play quite defensively, allowing me to pick off units one-by-one. My M10’s proved the value of 17pdr guns by knocking out everything from a captured Tiger to an SU-100 platoon and his commander in a T-34. 8-1 to me. 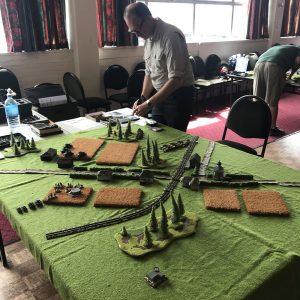 Round 2 I found myself up against Brent in a game of Breakthrough. He found himself attacking whilst my recce were pushed back and on to the defensive, dashing around the table trying to stop him from breaking through. He aggressively pushed a big group of armoured PanzerGrenadiers, supported by mortars and SP guns up through the middle of the table, along with his recce. This forced me to counter them with my 6pdrs and M10’s, effectively removing them from the upcoming fight for the rear objective. Luckily it paid off for me with the push being blunted thanks to massed firepower. On the back objective the Panthers came on and took control of the game, whilst having to keep a wary out for flanking recon units with their 2pdrs. I managed to whittle down the Panthers and Crocodile flamethrower his second infantry unit, but couldn’t seal the deal… 3 all for a mutual loss. 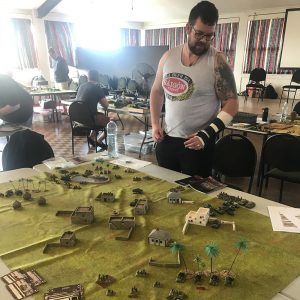 Round 3 and another first-time opponent with Andrew and his Beach Defenders in Dust Up. Now I’d like to say I had a plan in this game but his Pak40s and Pakfront 88s combined with an open-ish table threw me. I YOLO’ed forward and rushed the near objective with my recce and M10s, putting him under enormous pressure. With no German forces near the objective and elements of 3 units (and my HQ) now contesting it, I challenged him to shoot me off. Unfortunately, thanks to a combination of poor planning by me and some reasonable dice he managed to kill or bail everything, before finishing off the survivors in the next turn. We ground out a few more turns for VPs before I conceded. 6-3 to Andrew. Round 4, a new day but an old friend, Scott, with his FE German Grenadiers supported by a Ferdinand, Marders and range of guns. Despite feeling fresh I was struggling to come up with a plan for Scott’s army and decided to split my force a little, to keep control of my objectives and then push the rest in through the centre of the table, allowing me to pivot left or right and strike an objective from there. That is where the plan and the actual result parted ways. Taking a serious of calculated chances I found that the dice just didn’t want to go my way with Scott’s PaK40s earning the player of the day award – not for performing better than average, but for consistently doing what was asked of them – need 3 hits, get 3 hits, need 1 kill, get 1 kill. The Ferdinand that scared me ended up with (possibly) one Dingo kill, whilst the rest of the force just got the job done! In the end I couldn’t even count on my air support (which had earned the “Rare As Fairies” title across the weekend) to help me finish off anything. A disappointing, but very fun 8-1 to Scott.

I still blame Simon McBeth whom I later realised was the source of my terrible dice. Each time he passed by during the day they would roll badly! 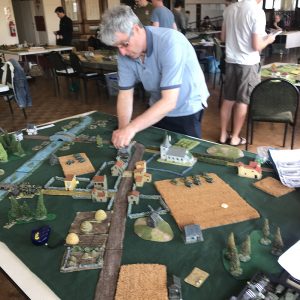 Round 5, and whilst I was keen to finish the weekend, I was still feeling energised for my final game. I found myself up against Julian and his Soviet Engineer Sappers, IS-2s, captured Panthers and SU-76s. Defending in a game of Breakthrough I pushed a unit of recce with infantry towards the back objective, whilst I focussed everything I had on his initial infantry, SU’s and Panthers, knocking everything out over a couple of turns. The risk I was taking was that I would have too much invested in blunting his initial push and not enough to stop the IS-2s when they turned up almost proved too much. Julian’s IS’s came on at the first opportunity and cleaned out the objective, pushing the few surviving infantry teams away. Luckily for me the long-range firing of the M10s meant he was under some pressure and the slowly advancing 6pdrs eventually gained a line of sight to the tanks, and the Typhoons even made a few appearances. Thanks to a little luck and a lot of firepower I neutralised the tanks and with the infantry under mortar MG fire he was unable to secure the objective. 8-1 to me.

With the weekend finished I found myself somewhere in the bottom half, but with a strong sense of satisfaction that I had really enjoyed myself, played people that I rarely get to play, or have never played, and managed to get a lot of fresh models on the tabletop.

I did learn a few things about my force.

And with that in mind… back to the brushes!