With two companies of tanks already planned, as well as a pile of support options, I thought it might be fun to add an extra company to the mix, if for no other reason than I like the new plastic Daimler and Dingo models, but also because all the cool kids are running Armoured Car Formations I thought I might give one a go too!

There is no dedicated Armoured Car Formation in the book, but thanks to Command Cards we have the option for one and to my eye it looks pretty interesting. Haven’t played it myself but why let that get in the way of a little enthusiasm. 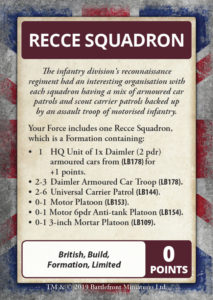 The Formation has an HQ Daimler, 2-3 platoons of Armoured Cars, more Universal Carriers than you can shake a stick at, and a small portion of ground pounders – a Motor Platoon, 6pdr anti-tank guns and a Mortar Platoon. The way I see it, there are Armoured Cars for some flash and dash, Carriers for sneaky-sneaky, whilst the units with legs can do a pretty decent job of holding an objective. It also gives a me a good reason to actually get my infantry painted (bonus points!). For around 30-35 points, depending on options and upgrades, I can get a Formation that has all the minimums, along with the guns, infantry and mortars. This still leaves me with plenty of points to run a second Formation, or a few “Black Box” support platoons (Shermans, Cromwells, Churchills etc) and some Divisional level assets too.

A quick bit of Google-foo led me to another reason why I need to build and paint this Formation… the 11th Armoured Division was supported by the Inns of Court Regiment, also known as the Devils Own. Where did they get the nickname, I hear you saying? Well, and this is where I turn to Wikipedia and just pull a “copy-and-paste”.

The Bloomsbury and Inns of Court Volunteers was reformed in 1797 during the Napoleonic Wars. It was shortly afterwards that the regiment gained its enduring nickname. During a review by King George III in Hyde Park in 1803, the King used his dislike for lawyers – particularly ones carrying arms – to name the massed ranks of the Law Association as “The Devil’s Own”. “It is understood that the King was in high health and excellent spirits at the time. When the ‘Temple companies’ had defiled before him, his Majesty enquired of Lord David Erskine, who commanded them, as lieutenant colonel, what was the composition of that corps? ‘They are all lawyers, Sire,’ said Erskine. ‘What! What! ‘exclaimed the King, ‘all lawyers? all lawyers? Call them the Devil’s Own, call them the Devil’s Own!” “And the Devil’s Own they were called accordingly.”

There is something appealing about unleashing an army of lawyers on an unsuspecting opponent!

So that makes three Formations from the new book that I am very keen to paint – each one gets to look different from the others, and each one will give me a very different gaming experience, even if I keep the supporting elements largely the same.

At this point I should probably stop digging through the book and Command Cards in case I find anything else interesting, and just starting painting some models…. Hmmm, some M5 half-tracks are awfully tempting to add as a Command Card to my Motor Platoon or 6pdrs!