With the D-Day: British book due out shortly, I thought I’d take a quick look back at my original painting plan and then have a quick review of what the next few months might hold for me.

My original list was simple, lots of Shermans along with some supporting elements. You can find the list here… With the Universal Carriers finished recently I can happily say that I actually managed to get the whole 100-point force painted. I even managed to paint up the Churchills that came in the army box and whilst they have been pretending to be earlier models, with the release of D-Day: British they will be able to hook up their trailers and turn into Crocodiles. The Typhoons weren’t on my original plan either, but the idea of painting something different (i.e. not green) really appealed.

Where I did fail was the infantry – whilst these were not in my initial painting plan, I had good intentions to paint up a couple of Motor Platoons. Painting the artillery crew for the 25 pdrs I wasn’t entirely happy with how they came out, so I kept putting the infantry further down my to-do list. This is something I will have to rectify.

From a gaming perspective also realised that my 3 tank platoons were just too fragile. Part of me thinks I should grab another 4 Shermans so I can max out the platoons, but the other part of thinks that with Cromwells and Churchills coming in the D-Day book, I should just paint those instead.

So now that I have opened the door, what am I likely to be painting from the D-Day: British book, other than some infantry!

First up will be Churchills. A small company of these, along with some AVREs, will look really interesting, play quite differently from my Shermans, and be a nice self-contained project that works alongside everything else I already have. 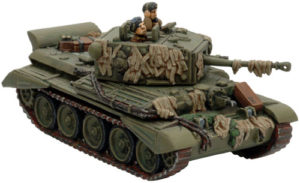 Next will be the Cromwells. In my mind I think of them as fast Shermans, but I am sure that once I get them on the table the differences in stat lines will make me have to play them quite differently. I’ve also wanted to build a Cromwell force ever since James upgraded the old resin and metal models with individually sculpted versions. I’ll need to look into how to replicate his hessian strips!

After this I should probably work on the infantry… but it is highly likely I’ll be doing some more vehicles. A Daimler / Dingo Recce company (Command Card) is really appealing, perhaps a support Churchill Formation from Fortress Europe, or some 6 pdr AT guns, definitely some Crusader AA, maybe some Bofors too, and perhaps another platoon of Carriers… Of course, there are also Paras!