Round the office we are still discussing our games at FlamesCon, even though it was almost two weeks ago. These discussions often turn to looking at what armies our opponents fielded and what we thought of them. One of the themes of the weekend, for Wayne and Victor at least, were “how many Churchills can I face over the course of the weekend?”

This lead us to taking a second look at the trusty Churchill tank. Whilst a fan favourite here in the office, none of us had been excited enough to build an army featuring this heavily armoured beast – yet that is…

Since I’ve been working on the British, I thought it might be a good time to start looking at whether or not I should amend my painting plans and add a few of these in to the schedule. The way the Churchill stands under Fortress Europe, I only have the Italy Churchill Squadron as an option. This is not a problem though as the list looks pretty rock solid on paper with a nice mix of Churchill and Sherman (with Firefly) tanks, along with Stuarts, inside the basic Formation. The Churchill packs a useful 6pdr that is AT 10, Firepower 4+, but where it really shines is Front Armour 8. This means it can duel it out with Panzer IVs with a slight advantage (PzIV shooting at the Churchill is AT 11 vs FA8, whereas the Churchill shooting at the PzIV is AT 10 vs FA 6).

So on paper, it looks like an option, however before I start painting or assembling anything I thought I should draft a list as a starting point for some Theory-Flames discussion round the office. 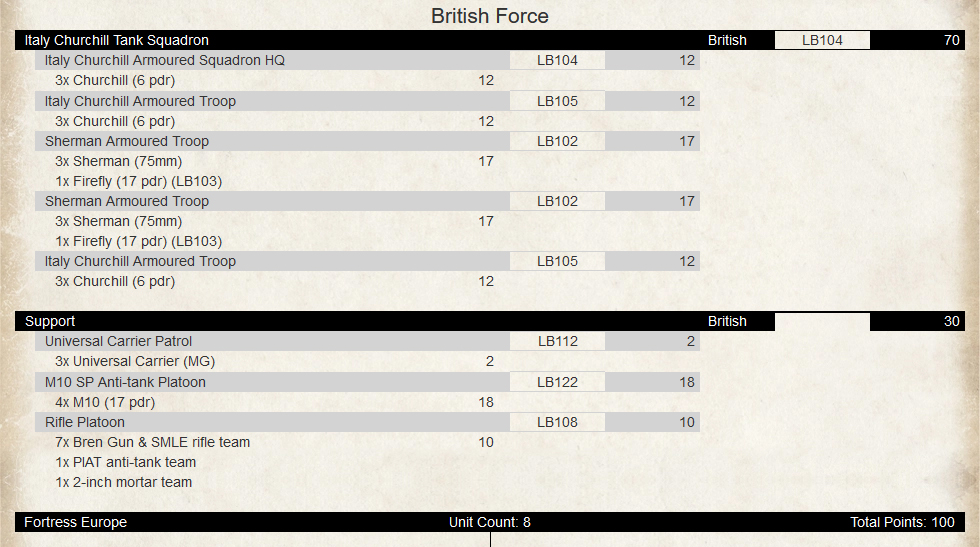 The list looks great at first glance. Plenty of Churchills to do the heavy lifting, pushing towards the enemy and soaking up fire, as well as 17 pdrs on the Firefly and M10s to do the tank killing. Best of all the Sherman platoons are full strength as I still feel I underestimated the importance of this when it came to casualties and loosing platoons after a single kill and bail result.

This still leaves a few points to give me an all important Spearhead platoon in the form of some Universal Carriers, and a utility unit- 9 stand Rifle Platoon  – that can dig in and defend, or move up and assault.

Looking forward to D-Day: British there will still be plenty of uses for the Churchill, after all the plastic kit makes a whole variety of models that saw service in Normandy and beyond so it is safe to say that I will get plenty of gaming value out of the company if I do choose to paint it up.

So at this point the question really is… should I stop pontificating and finish my Carriers (which only need some crew painted) or should I get distracted and start assembling Churchills? 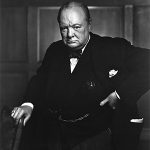 With no deadlines to currently aim for I guess the answer will be “whatever I feel like” the next time I head out to the garage to do a little Big Four hobby time.