Over the past couple of years I have been playing a lot of Team Yankee and one of the things that I’ve found quite fun, is building and painting aircraft / helicopters. They give you a chance to paint something quite different, use (generally speaking) a new colour pallete, and try out some different techniques. 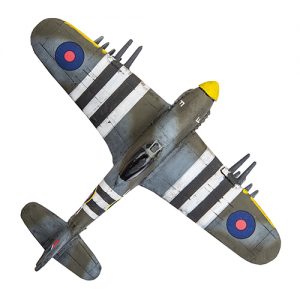 I decided to paint something a little early, grabbing a pair of Typhoons (which are in D-Day: British) and putting my much delayed Carriers on hold for a bit longer. The Typhoons (or Tiffy / Tiffies) pack a lot of firepower with 20mm cannons as well as rockets that are more than capable of taking care of heavy  armour.

The models were fun to paint, especially since I was able to play around with some masking tapes to try and get the invasion stripes on the wings and fuselage vaguely straight. Having painted them there are a few things I would do differently if I were to paint some more, but overall I think they add a really interesting unit to my army.