It took me a while, but I have my first unit done for my Big Four Of Late War German force. I really enjoyed painting these Panzer IV tanks, and had a bit of fun modifying a few of the Schürzen plates. The haphazard spray-gun squiggly line camouflage applied by the 2. Panzerdivision tankers was an interesting challenge, but I think it has come out OK.

I painted these first with a Dark Yellow airbrushed basecoat, then a black magic wash (a mix of water, floor polish, and Indian ink), then airbrushed the flat panels with the base colour again, leaving the darker areas around the details. The green and brown camouflage colours were then applied with my airbrush as thinly as I could. The details like tools, tracks, and tyres were painted, decals added, before each tank was given a drybrush of Vallejo Model Color Buff. 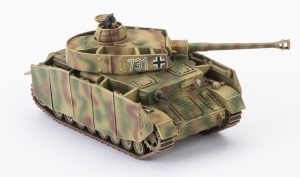 Next, I’ll paint my the second Panzer IV Platoon. It will get the same treatment.