After much work I’ve completed my planned French force for 1944-45. It has actually turned out to be quite large with the recent additions of a third Rifle Platoon, a 105mm Artillery Battery, and a M4 Sherman Tank Platoon of 5x M4 Sherman tanks.

The Formation has ten Units, and I have another four Units in Support for 116 points total. However, I’ll most likely run it at 100 points most of the time, dropping 16 points off the force. This could be one of the armoured units, or a combination of smaller units. There is also plenty of room for points fine tuning within the rifle platoons, or I could even drop the 9e Division d’Infanterie Coloniale Colonial command card and run them as straight Battle Weary ratings. 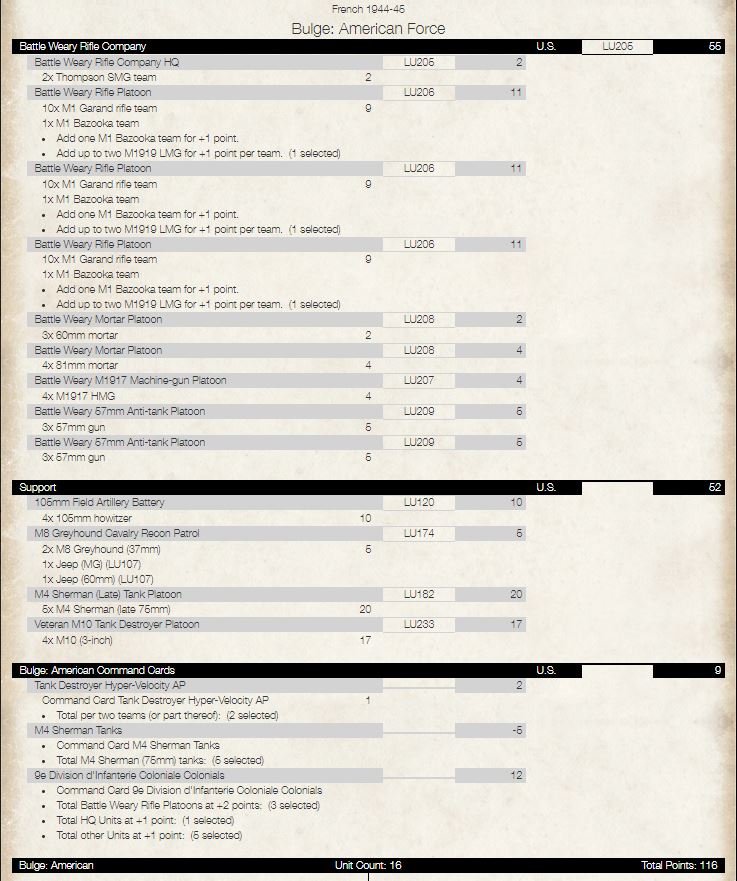 The Miniatures
For the French Rifle Platoons I used some French Tirailleurs from the old Tirailleurs Platoon (Italy) (FR812) I had got back in 3rd Ed FOW for the Italy Campaign. These miniatures are French Evan made for the release of Road to Rome from the Winter Americans. The main difference is a few unique figures with Adrian Helmets and an Officer in a Kepi. These can be happily mixed with the winter Americans. For all the weapons and support units I mostly used the winter American packs with a few other French from the above pack and the old Mediterranean early-war range for the occasional Officer, NCO, and crewmen. I also did some head swaps to put French heads on miniatures such as on the Jeep crew.

The M4 Sherman Tank Platoon are actually Sherman V models from the British range. The official American designation of this tank is M4A4. Though, the Americans did not use the M4A4 Sherman themselves, they did supply them for the Lend-lease program not only to Britain, but to France as well where they made up about half of the French Shermans. The French also got large numbers of M4A2 diesel Sherman as well as small numbers of M4A1 & M4A3 76mm and M4A3 Jumbos. There may be a French Sherman Tank Company in my future. Check out these websites for more details:
French Shermans during WW2…