Late last year Victor ‘suggested’ (read badgered me incessantly for two weeks and resorted to social media to get everyone else to convince me to do it) that with the release of Bulge: American I should do a new winter American army.

I’m glad Victor, and the rest of the community, convinced me to do the army as I’m really happy with how the army looks now that it’s finished. (Shhhhhhhhh, don’t tell Victor otherwise he’ll ‘suggest’ more armies for me to do).

While the basic paint-job and techniques are the same as my Soviets, just with a different base coat, I think I enjoyed painting these even more because there was more variety of slightly different tanks within the army than my Soviets. I was also able to take everything that I learnt from my Soviets and get straight into painting the army without the need to experiment with any new techniques.

Its also probably one of the fastest armies that I have painted recently. It’s been about 3½ months since I started the army, but there were 3 weeks in that time where I couldn’t do any work on it.

My favorite platoon has to be my first Sherman Platoon, where I swapped the tracks for the Jumbo tracks (that have the grousers sculpted on). There is no game advantage for doing this, I just think they look cool with the wide tracks.

I have painted all of the turret options for the tanks to give me plenty of options, as well as an extra pair of up-armored Easy Eights to give me some flexibility in the formation.

By using combinations of different formations and command cards I can build forces ranging from as little 64 points, by dropping the Super Pershing and using the regular Sherman Company, through to 134 points by upgrading all the guns to 76mm, adding the extra Easy Eights, giving all the tanks HVAP ammo, and adding George S. Patton Jr. 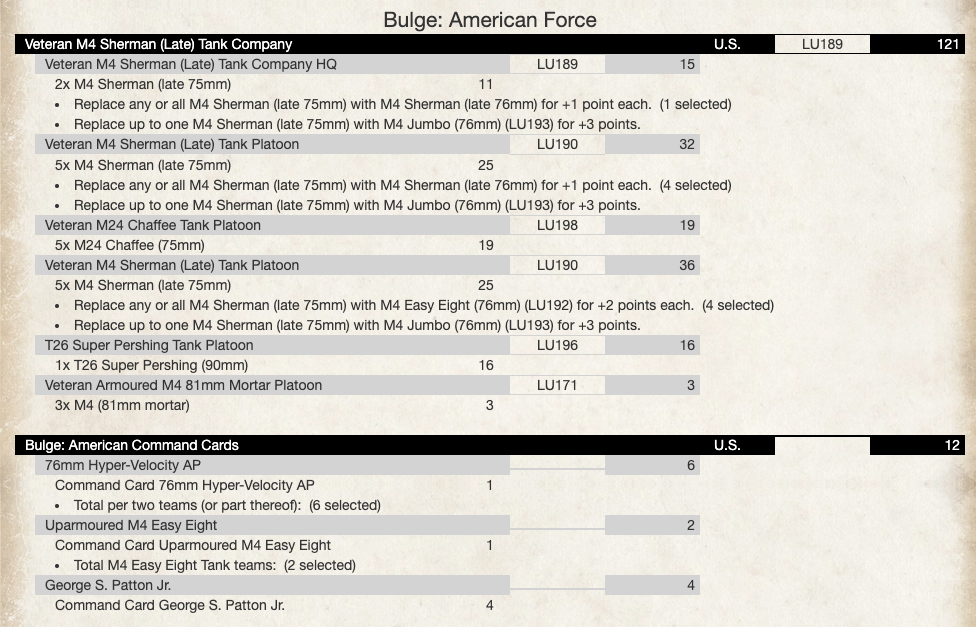