The ability (and freedom) to travel to a tournament, hang out with friends and play some games has been something that most gamers have been able to take for granted. After a year (or more) of lockdowns, cancelled events, and the need to maintain some sort of social distance here in New Zealand, things are returning to normal and events are happening with a little more regularity. One of our favourite events of the year is always Panzerschreck – the oldest Flames Of War tournament in the world. There is no one reason as to why it is great, it really is the combination; the road trip down with friends, the short stops to shop, climbing over tanks at the National Army Museum, hanging out with resident sculptor Evan, catching up with friends, too much eating, winning (or losing) some games, and then finishing it with a post-tournament “what went wrong, what are we doing next year” cathartic road trip back home!

Road Trips, Shopping, Eating and Tanks!
This year the four of us crammed in to a rental Jeep Cherokee, which should have been big enough but thanks to a small pile of orders we were taking down for customers we ended up filling every available space with gear, miniatures, or clothes. I think next year we are going to need a bigger boat… I mean car! The road trip really is all about hanging out, talking about work, gaming, life and everything else going on. There is also time for a fair amount of pre-tournament smack talk! Our trips each year take a similar course (unless snow gets in the way) with a stop in Hamilton (about 90 minutes in to our journey) to swing by one of our favourite gaming shops (Games Centre) for a chat and to pick up any “essentials”. Short on space this year some of those essentials kept falling from their precarious perch in the back of the car on to Victors head… Hamilton is also a good spot for a coffee and sausage roll (an NZ delicacy!).

Back on the road we then have a quick 2 hour sprint down to Taupo in the middle of the North Island. Marking the halfway point it is a great chance to have lunch (yes we do always stop at the same Turkish restaurant each year!) and swing by our next hobby shop; Taupo Hobbies. We didn’t end up adding to the load this time (which was a surprise) but it didn’t stop us having a really good look and contemplating the idea of building some rather larger World War II naval models!

Next stop is Waiouru and the home of the New Zealand Army Museum. We normally arrive too late to hit the gift/book shop but we are always prepared to brave the cold to check out some of New Zealand’s tank history parked out the front. There is nothing like climbing up on a Centurion (or even the Scorpion) to give the models that we play with a real sense of scale. With this taken care of it is the final push to Palmerston North and Evan’s house… A total trip of around 512km (318 miles) in a very leisurely 11 hours!

The weekend turned in to a glorious mess of dice, explosions (some on the table and some in our heads), great opponents and fun games so I can’t give a breakdown of the individual games… and based on our performance I am not sure anyone wants my tactical advice. So what went right or wrong? Casey’s army was fantastic to play with, not only was it really well painted but it was a great combination of models. In hindsight though we really could have dropped one of our infantry units and replaced it with a template delivery device. Any sort would have done; Katyushas or SU-76 assault guns being my preference, but anything would have been useful. The IS-2s were great at knocking out dug-in troops IF they hit. I spent most of the weekend looking for 5’s and often 6’s to hit. In one game I literally got 2 hits in 6 turns, with 10 tanks. The IS-2’s did excel in surviving however with their armour allowing them to stand up to any opposition and hang around, and what they hit generally stayed hit! 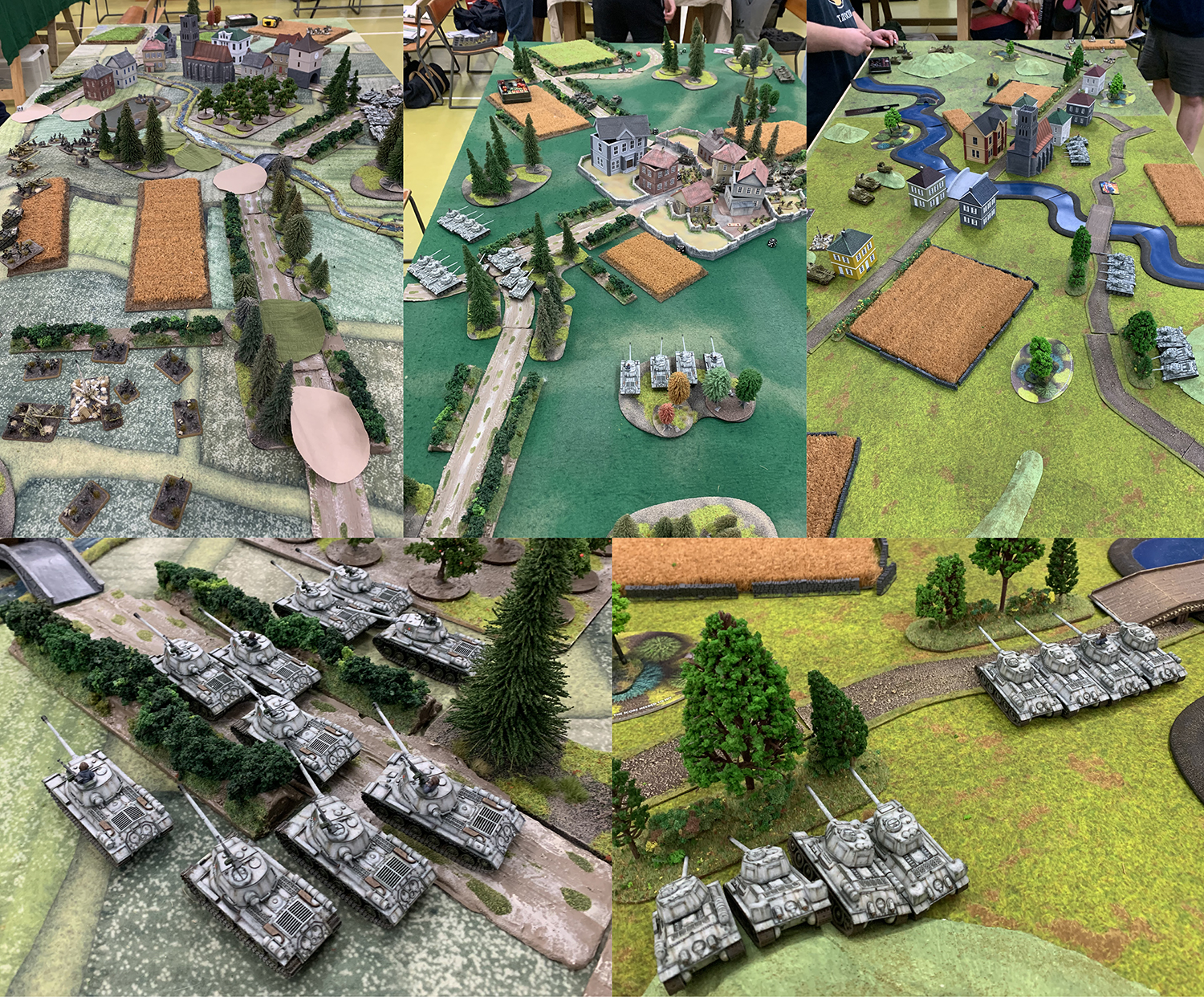 Casey’s T-34/85 company found itself doing a lot of the heavy lifting over the weekend, rushing flanks, having gun-fights, being assaulted (and counter-attacking) and generally being in the mix. Of course this meant that they didn’t tend to survive! Casey may have wished once or twice over the weekend that they still had the front armour 7 of the “good old days!”

Favourite Game: Too hard to pick… our loss to Tom and Alex with their Elefants was a hard fought game of manoeuvre and thrust that could have gone either way, whilst our narrow victory vs Bob and Steve could have just as easily been

a loss if not for the resilience of the IS-2 and their ability to go head-to-head with Tigers.

Wayne has always been a fan of Hungarians in Flames Of War, and I’ve caught the bug too, especially with the Zrínyi. The release of Bagration: Axis-Allies was going to fall shortly before Panzerschreck, so it made sense to take my new Zrínyi force, and Wayne being my usual team mate, I knew he would have plenty of Hungarian units to build a force to go with mine. Then Wayne said “But I want to paint something new for the tournament”, and I said something silly like “You should paint a full Huszar Squadron!” Thus our team was formed. We knew it wasn’t going to dominate the tabletop, but we were hoping for some funny moments and glorious cavalry charges. 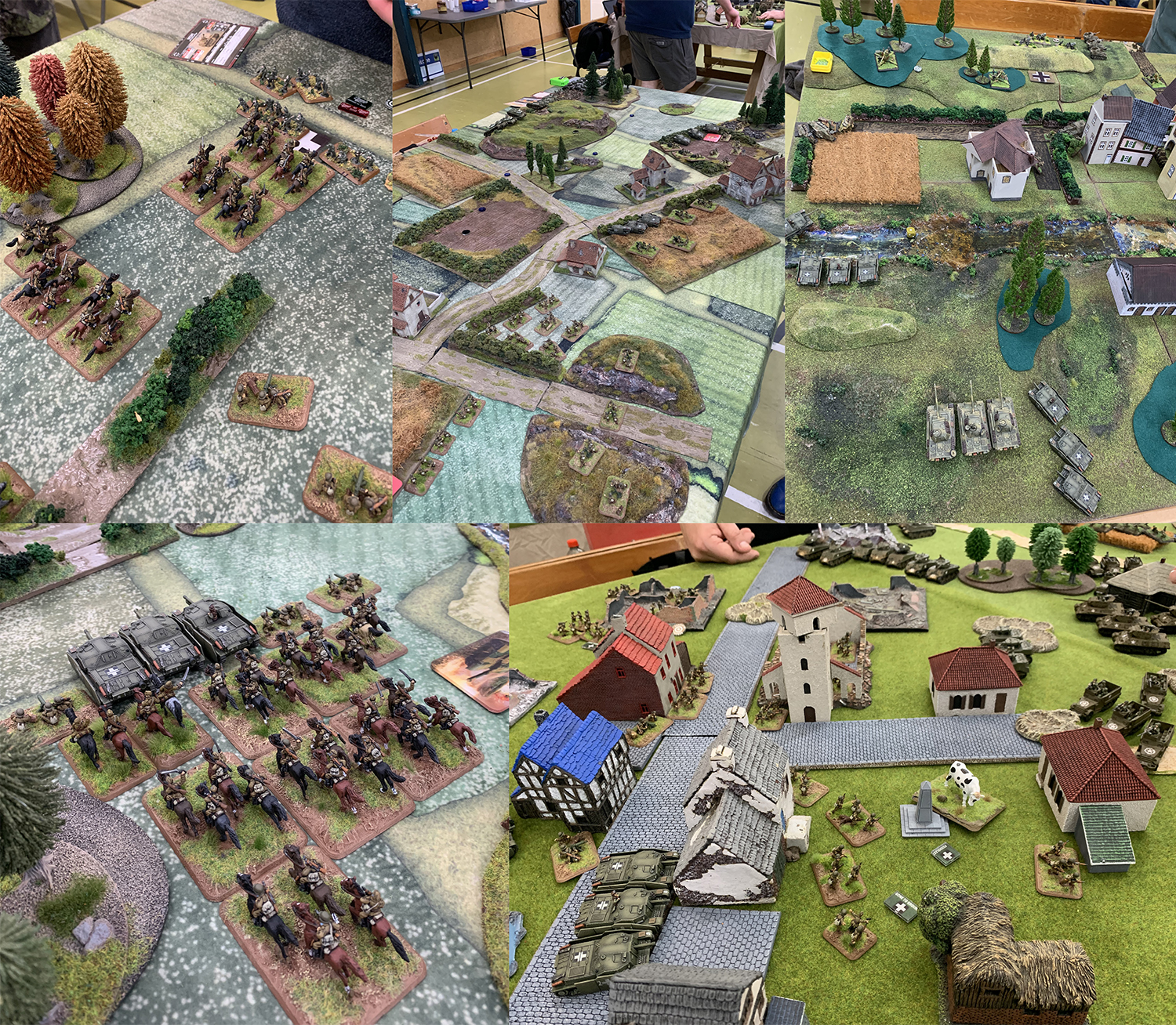 Unfortunately when it came to the games, we found ourselves defending against heavy tanks, or attacking elite MG infantry. This isn’t to say the games weren’t fun, just that there weren’t as many chances for a good cavalry charge as we would’ve liked. It’s lucky Wayne painted the dismounted versions of his platoons too, as they were great in defence. The Zrínyi’s on the other hand did great work, and their bombardments were quite effective. The Panthers kept our opponent’s tanks cautious, which kept our Zrínyi’s alive in most of our games.

Overall the tournament was a lot of fun, and was great seeing familiar faces that we missed out on last year.

The Long Road Home
With the weekend’s gaming over and done with (and after a good nights rest) we headed home on the Monday morning, stopping for a coffee and a tank of gas. Based on the comments from the back seat the coffee may have been made by Baldrick during World War I so next year we might find somewhere better than going with “hey Google, where can we get a coffee?”

The drive north is a lot like the drive south, just with different stops (the Army Museum book shop which is now open, Subway, since everything else was busy in Taupo, and Gaming DNA in Hamilton) and conversation that revolves around what went right, what went wrong, and what we are taking next year (140 points, Mid War, doubles! Oh yeah!). Stay tuned for some initial thoughts over the coming months on what we might like to build.

As always Panzerschreck is a blast and this year was no different. Roll on 2022!